In a CNC machine shop, the best way to create a production bottleneck is to do something by hand. That said, it can be difficult to automate processes if the workpieces are not uniform, which is one reason hand deburring continues to be popular. Unless each part has a similar burr in the same location, it can be difficult to see how to deburr without using a hand grinder.

Fortunately, automated finishing processes have been developed to tackle the need for uniform deburring at high volumes. One solution is mechanical finishing by submerging parts in abrasive media — often suspended in liquid — and applying motion.

The Basics of Barrel Tumbling 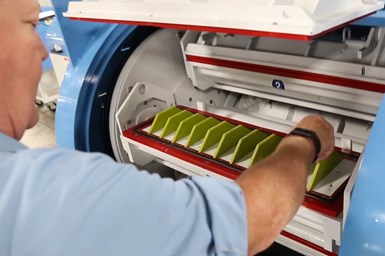 High-energy barrel finishing from Mass Finishing enables the user to deburr parts by flooding the barrels, pictured here, with a solution consisting of abrasive media suspended in a liquid. The barrels spin as the work area that holds them rotates in the opposite direction, causing the liquid to move and wear away imperfections in the part, which remains relatively still.

According to Tom Mathisen, vice president at Mass Finishing Inc., his company’s finishing solutions have been effective for two reasons: part complexity and process efficiency. “Our barrel finishing solutions can evenly finish complex parts, including 3D-printed parts with net-like shapes,” Mr. Mathisen says. “On top of that, the process is simple and repeatable.” Mass Finishing has been able to accomplish this with a series of barrel-finishing machines that can cut hours out of the finishing process.

The high-energy barrel finishers get their name from the cannisters that run the length of the work envelope, with four of these barrels to a machine. The barrels are filled with a liquid (usually water) that is in turn filled with abrasive media made of different materials such as hard plastics or ceramics. Depending on the parts, dry media is also usable.

When the machines rotate the barrels, the centrifugal force moves the media throughout the part, wearing away at the surface of the part, cutting away burrs and finishing within 1 Ra. With multiple barrels in each machine and barrel dividers enabling the user to place multiple parts in each barrel, the user can polish dozens of parts at once, and in less time than it takes to deburr a single part by hand.

The barrels are sized to the machine they are equipped on, and the shop can use dividers to separate parts within the barrels, increasing the capacity of the machine.

Because the force of the spinning barrels is able to carry the media into tiny crevices, the system is able to easily achieve the desired finish in complex parts, even those with near-net shapes. The machines use media that range in size from 1 cubic millimeter to 1 cubic inch. “The smaller media are used for smaller part features,” Mr. Mathisen says. “Fortunately, there is no difference in the cutting rate or finish.”

While the cannisters rotate, the machine actually spins them in the opposite direction of their rotation at a one-to-one ratio. The ratio of rotation make the cannisters appear not to be rotating at all as they spin in the machine, but the movement causes the media to move within the machine while the parts remain stationary. This enables the machine to finish the part without damaging it during operation, making it ideal for parts with delicate features.

As you can see with these muzzle brakes, barrel finishing is able to get an excellent finish on complex parts with deep holes and irregular features.

A major advantage of this finishing process is the isotropic finish. “The chaotic movement of the media in the barrel makes the abrasives cut in all directions,” Mr. Mathisen says. “That means that we leave no directional marks in the finish. It is equally smooth in all directions.”

Additive manufacturing (AM) has been a major boon to Mass Finishing’s business, as the complex shapes of 3D-printed parts are perfect for submerged mechanical finishing. The near-net shapes and difficult-to-access features that make AM desirable also make them difficult to finish. However, the abrasive solution used in the barrel finishing is able to reach every feature exposed to the surface, making it ideal for 3D-printed parts.

Medical manufacturers have gotten use out of the high-energy barrel finishers thanks to complex, 3D-prinnted implants. “Roughly 25% of the parts in our lab right now are additive,” Mr. Mathisen says. “And medical implants make up a big chunk of that.” The organic shapes of the human body parts these implants replace makes Mass Finishing’s machines useful,

AM and near-net parts are not the only uses for these machines, however. Crankshafts, with their irregular shapes and deep features, are excellent candidates. “Racing crankshafts need that 1-Ra finish that our machines provide,” Mr. Mathisen says. “At that finish, the oil flows over the part effortlessly, creating more horsepower.”

According to Mr. Mathisen, his company puts time into developing a process for each customer. “We ask our customers to send in sample parts for testing before purchasing one of our machines,” he says. “At our lab, we figure out which machine is best for the part, and we nail down the process to make sure the customer can operate it as easily as possible.” 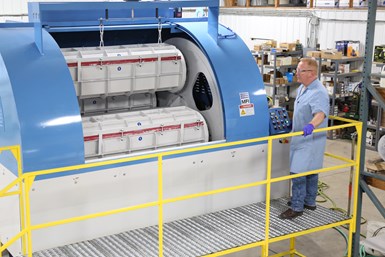 The barrel-tumbling machines come in many sizes to accommodate parts both large and small. Tom Mathisen, pictured here, is overseeing this machine at the company’s lab, where he helps develop processes for users.

By testing parts and developing a process at its lab, Mass Finishing is able to provide users with guidance that makes using the machine as easy as possible. “There’s a perception that barrel finishing is a cumbersome process,” Mr. Mathisen says, “but we’ve simplified it.” That said, Mass Finishing will also take on jobs to polish parts for its customers.

Another major misconception Mr. Mathisen hears is about the abrasive solution itself. “There’s an idea out there that the ratio between the liquid and the media is exact or difficult to maintain,” he says. “But in high-energy barrels, it’s actually very forgiving.

With the company developing the specifics of the process, the shop has little to do but turn it on and polish parts.