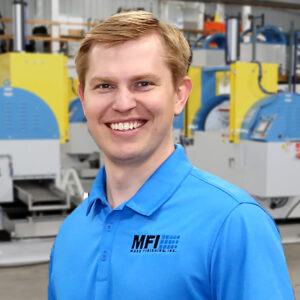 Cole started working on the Mass Finishing team in his early teens, when his father Mike and his uncle Tommy owned the company. He would mow the lawn, sweep the floors, and do other odd jobs around the facility. He worked at MFI during the summers through high school putting together machines, wiring motors, mixing up media, and filling orders. After attending college and spending time working in marketing and broadcast news, he returned to Mass Finishing at the start of 2018.

Cole has now been working at Mass Finishing for four years and continues to excel as Sales and Marketing Manager. He obtained a bachelor’s degree in Mass Communication with an emphasis on Broadcast News. In addition, he has an associate degree in Sports Science.

As Sales and Marketing Manager, Cole works directly with the customers. This is one of his favorite parts of the job. Furthermore, he enjoys being part of all the different projects, from cutting-edge medical devices to military devices and space components to NASCAR engines. Cole truly takes pride in knowing that he works for a company that provides surface finishing solutions to customers that help save time and money, while aiding in eliminating dangerous jobs for their workers.

When asked what working for an employee-owned company means to him, Cole replied, “I remember the day that my dad and uncle Tommy bought the company in 1995. I was ten at the time and remember someone at the meeting saying, one day this could all be yours. Here we are 27 years later and I’m an Employee Owner.”

Cole and his wife Kelly met in Albert Lea, MN in 2009 while they both worked as reporters for KIMT. Today, they reside in Plymouth, MN with their three children, two boys who are ages six and eight and a daughter who is three. Together, they spend time going on family trips to see extended family. When Cole has free time, he enjoys golfing, hunting, and playing hockey in a local league.